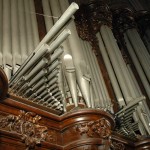 The finales of the 24th international competition of organ “Grand Prix of Chartres” took place on Sunday, November 8th, 2014 in the cathedral Notre-Dame of Paris.
Because of restoration works of the nave of Chartres cathedral, the organ of Chartres is currently under coffering..

About fifty commitments are offered to the award-winnings according to the rewards for recitals in France, Russia, Germany, Spain, Great-Britain, Iceland, Italy, Luxembourg, Slovakia, Switzerland.