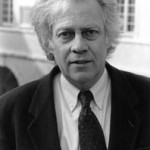 Born in 1936 in Paris, Gilbert Amy won a first prize in the Concours General de Philosophie. He then decided to turn definitively towards music and entered the Paris Conservatoire, where he was the pupil of Simone Ple-Caussade, Henriette Puig Roget, Darius Milhaud and Olivier Messiaen. A few years later he met Pierre Boulez who commissioned from him “Mouvements”, which was first performed at the Domaine Musical en 1958. From then on, his works were performed in all the leading venues for contemporary music : Donaueschingen, Darmstadt, Venice, Royan, Berlin, Warsaw, etc..

In 1967 he succeded Pierre Boulez as director of the Domaine Musical concerts, a post he held until 1974, when the ensemble ceased activity.

In 1976, Gilbert Amy founded the Nouvel Orchestre Philharmonique de Radio-France, and was appointed as first conductor and artistic director. He gave almost 100 concerts and recordings with this orchestra, and went on several tours in France and abroad. Among his teaching activities at thsis time may be mentioned his conducting classes at the Centre Acanthes en 1979 (with Gyorgy Ligeti)

In 1982, he taught composition and music analysis at Yale University (Usa). From 1984 to 2000 he was Director of the Lyon Conservatoire Superieur de Musique (CNSML).

In spite of thes various activities as interpreter, artisctic director and teacher, Gilbert Amy composed since the mid-1950. His catalogue includes instrumental as well as chamber music, ensemble and incidental music (theatre, film). The voice appears in many of his works, as early as 1956 with “Oeil de fumee”, a cycle of songs, until his recent opera “Le Premier Cercle”, fourty years later.

The orchestral music might be considered as part of the nucleous of his oeuvre, focused on sound and space organization. His “Orchestrahl” (1985-89) appears as one of his most ambitious symphonic productions.

In 1999, his opera “Le Premier Cercle” was premiered with great success at the Opera National de Lyon (France) and distinguished by critics as the major lyric event of the last 10 years.