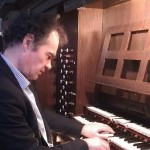 North from, Laurent Fievet studied organ under the direction of Yves Devernay at the Conservatory of Roubaix where he won first prize.

It then goes to the region of Angers National Conservatory where he studied under Jean-Louis Gil and sees it also won the first prize.

In 1987 he was admitted to the Conservatoire National de Region of Rueil-Malmaison and works with Marie-Claire Alain and Susan Landale. The excellence and virtuosity attributed to him unanimously with honors.

It is since 1988 organist of the Notre Dame in Nice and teaches organ and piano at the Conservatory of Grasse.