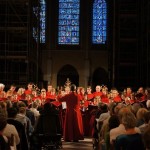 The present members of Brecon Cathedral Choir are today’s successors in the long line of musicians who have enhanced the worship at this holy place for over 900 years. A Norman Benedictine Priory was founded on the site in 1093, and would have resounded to the chant of generations of monks singing the office. In 1537, at the time of the Dissolution of the monasteries, the Priory became the Parish Church of St John the Evangelist, and remained so until its elevation to Cathedral status in 1923. Throughout this time music would have played an important part in the liturgy and worship.

The choristers are all aged between 8 and 13, and attend local schools in Brecon. They rehearse after school on three afternoons every week during term time, and sing Evensong on Fridays in addition to two fully choral services each Sunday. Each chorister receives individual tuition in singing and in music theory from the Director of Music, and a number learn musical instruments in addition. The Brecon Cathedral Choir Trust was set up in 2003, with the aim of ‘empowering young people through the gift of music’ by funding a first-class musical education for its choristers.

The Lay Clerks are the adults who sing alto, tenor and bass in the choir. They rehearse on Thursday evenings and join with the trebles to sing evensong on Fridays and for the two Sunday services. They do so as volunteers, and some travel considerable distances (from as far away as Neath and Bristol) to sing with the choir on a regular basis.

In addition to singing for cathedral services and concerts, the choir undertakes recordings, broadcasts and tours.

They sang in Ripon Cathedral and York Minster in 2009, and in October 2010 performed concerts in and around Blaubeuren in Germany during an eight-day tour. In 2012, the choir visited Scotland, singing concerts and services in Glasgow and Edinburgh, and in the summer of 2014 will be in France for a concert tour in the Loire Valley.

Mark Duthie was born and educated in Aberdeen, and during his time at Aberdeen University was Assistant Organist at St Andrew’s Episcopal Cathedral in Aberdeen. On graduating with First Class Honours in Pure Mathematics he went as a postgraduate student to Jesus College, Cambridge, where he sang in the Chapel Choir for two years. He was then Organ Scholar at Chester Cathedral prior to his appointment as Assistant Master of the Music at Peterborough Cathedral in 1994. During his time in Peterborough, he founded the Cathedral Girls’ Choir, which he directed in concerts, services and broadcasts.

Mark Duthie moved to Brecon in 2007 to become Organist and Master of the Choristers at Brecon Cathedral. He is an examiner for the Associated Board of the Royal Schools of Music, and has examined extensively in the UK, and in Hong Kong, Taiwan and Malaysia.

Paul Hayward is graduate University of Wales, Royal College of Organists, and from Trinity College in London, and exerted before with the catholic cathedral of Nottingham.

He continues its studies of organ with David Briggs. 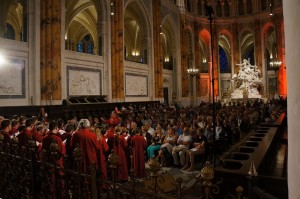