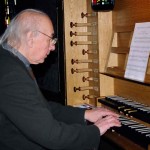 From 1951 he was successively organist at Saint-Germain-l’Auxerrois, then Saint-Nicolas-des-Champs in Paris. At the same time, he delved into organbuilding, in order to increase his knowledge of the instrument. In 1964, after having closely observed the construction by Alfred Kern of the organ of Saint-Séverin, he was appointed organist, remaining there for more than thirty-five years.

From 1956 on, he held professorships at the conservatories of Strasbourg and later Besançon, then at the National Conservatory in Paris from 1986 to 1995 ; he has there by imparted to his students a musical language and technique well grounded in musicological research and the historical study of organbuilding. His teaching had a major influence on the present generation of the French School of organ playing. Yet today, Michel Chapuis shares his extensive knowledge through organ academies, whether in Europe, in Japan or in the United States.

His countless recordings have become standarts in the field of interpretation of German and French music from the 17th and 18th centuries ; his complete Bach and Buxtehude recordings, his records devoted to pieces by François and Louis Couperin, Grigny, Titelouze, Dandrieu, Clérambault, Daquin, and so on… are the starting point for any serious discography.