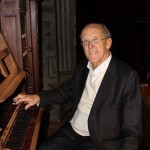 Italian organist and musicologist. He studied at the conservatories of Bologna and Paris and the University of Padua and taught the organ in Bologna, Bolzano and Parma, and music history at Bologna and Fribourg. He has been a pioneer in organ restoration and his performances of older music combine his musicology and practical musicianship.

Luigi Ferdinando Tagliavini has been professor of musicology at the University of Fribourg (Switzerland) since 1965. Highly active as a performer, he has made numerous recordings and received the following awards : “Premio delle discografia Italiana”, “Schallplattenpreis der deutschen Phono-Akademie”, “Choc de la musique”, “Premio Antonio Vivaldi”, “Premio Massimo Mila”. Writer of many musicological articles, he has gained some special distinctions : Medaglia d’oro of the Italian Ministero Pubblica Istruzione, “Tiroler Adler” of Innsbuck, Honoris Causa from Edinburgh University, member of the Accademia di S.Cecilia in Rome.

Luigi Tagliavini’s recital for the International Performer of the Year Award was played at Saint Michael’s Episcopal Church.