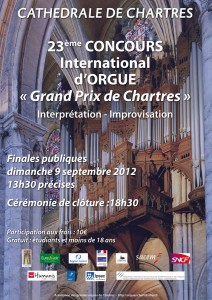 The finales of the 23rd international competition of organ “Grand Prix of Chartres” took place on Sunday, September 9th, 2012 in the cathedral Notre-Dame of Chartres.

70 candidates, representing 18 nationalities have enrolled for the interpretation or improvisation competition.